Nationalism is not a respectable ideology. To begin with, it is not an ideology, since it is not based on ideas, but on emotions. Nationalism is a sense of loyalty towards a nation which is shared by people having a common past, cultural or religious heritage. It is not easy to define nationalism, since the concepts of homeland, nation, history, language, race, religion, and tradition are combined in very different ways depending on the time and area of the world in which we try to define it.Nationalism is a multidimensional phenomenon, which implies an ideology that expresses itself culturally in different ways. It is able to bring together both individual citizens and broad sectors of society and often evokes intense emotions that can become very powerful. Nationalism acquires its most dangerous dimension when leaders start to boost their repeated arrogance of their superiority. It is not the awakening of nations to their own conscience.The loyalty and devotion that you can feel for your country are definitely reasonable and healthy but just having loyalty does not necessarily make you a nationalist. You can be simply a good citizen, a patriot because you love your country and respect its symbols, defend its traditions and solidarity with your compatriots at the same time you do not feel superior to others and  do not try to impose your beliefs or exclude  other people’s  rights and opportunities  just because they  do not share your skin color, your sexual orientation, your religion or your worldview. The point is that they do not have to look like you or become like you to be accepted and respected.The radicalization of nationalisms is a joke. This mythology does not have to be close to any reality.  It just has to be visceral and heroic.  I do not know the exact cost of true nationalism but the cost of wild romantic nationalism will have a long-term effect on the nation. Many times we have paid a hefty price for our nationalistic pride because populist demagogue is taking advantage of our political system.

Hating other countries does not make anyone a true nationalist. I am afraid some fake nationalists in Nepal have started using nationalism as a political tool to be in power. Some day we will lose everything to pseudo-secularist and fake nationalists, who believe nationalism is a virus, federalism is a cure. Deceiving is contagious and one way or another we all are victims of a colossal deception in the name of false nationalism. Majority of the time our nationalism is based on anti-India sentiments and feelings.

India  did the  best for itself as a country. If I were an Indian, I would be proud of what it did for itself. Time and time again we allowed Indians to interfere with us for our own greed. India is doing what they are supposed to do but we, as a nation, have failed to protect ourself. The attack always vectors for potential vulnerabilities. We are very vulnerable where politics is concerned. politically correct culture has gone too far for us. All the major political stakeholder are mocking the sick political system and India is taking advantage.

We live in critical moments. We are constantly facing a threat from the outside. As  J.K. Rowling says, “We are only as strong as we are united, as weak as we are divided. Without healthy economic activity, it is impossible to finance the development of a country. Without money, there is no education, no infrastructure, no health, no technological innovation. Since all this comes from the foreign exchange that a country obtains from what it produces and sells.

Nationalism must be part of the coming generations, preserving our identity. If we only lock ourselves in the nationalism, we will isolate ourselves to a world dominated by individualism. We urgently need better citizens, much more good citizens. Just being a nationalist is not being good as a citizen.

Not every nationalist is a good citizen or every good citizen is a nationalist.  Good citizenship is not a heart, it is in a brain which encapsulates attitude and behavior of a public conscience and honors obligations and duties of one against others and their rights, in a common, shared, private space.

Nationalism has been the virus that has destroyed Nepal from in and outside.  Patriotism is the love of own, nationalism is hatred of others. We are looking for  practical nationalism. Practical nationalism convinces those who do not allow themselves to be seduced by feelings. The problem of feelings is that they cannot be propagated to those who legitimately do not share them. Nationalism must show its rationality and become useful so that the understanding of Nepal as a nation is general for the whole Nepalese community. Ideologies vanish when they cease to serve in their role of intermediary between man and harsh reality.

There is a nation only if a community sees itself as such. We have lost the cultural capital that made us a distinctive and relevant group. We are culturally sick. Nationalism can unite or fragment a country. Progress must imply when the collapse of the borders that exist in our country politically, economically, socially and religiously without leaving aside our customs and stakes. We need to build the bridge not a wall between countries.

(The author is a lecturer and IT consultant. He also writes fiction under the name of Kapeed Joshi. He can be reached by email at info@dipakjoshi.com.np.) 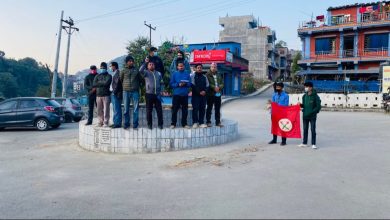